NCFG replies to WBC’s CEO regarding the stand

Please see the news blog for our reply to Nick Carter…

Thank you for your reply. To keep the email thread complete,
I have copied in the same recipients.

The Landlord and Tenants Act states that a tenant’s
abandoned assets become the landlord’s when the tenant goes bust, so it’s a
matter of law (and your lease definition) not interpretation or opinion that
the asset belongs to West Berks Council so thank you for confirming that. It
must therefore be incumbent on the council, which is accountable, to prove that
it doesn’t own the stand prior to disposal or removal taking place.

Furthermore from our recent FOI request, WBC and Hungerford
Town FC officers have stated in emails from July 2018 that the stand is being
sold by NFC and being bought by HTFC. This is contrary to your response to
NCFG’s stage 2 Complaint of 24 August where you claimed that WBC did not have
any plans to demolish any part of the facility.

You also take the view that this arrangement best serves the
wider community and puts the stand to good use. Please can you explain how you
came to this conclusion as it is difficult for us to understand what benefit
the football community in Newbury would get from this transaction. The
arrangement suits HTFC and WBC only, not the local community who have not only
lost their football ground, but also a valuable community asset which is
heading to a for-profit private company.

As the ground and buildings are protected by the ACV, please
also explain why the Community Right to Bid process has not been complied with,
thus denying our community group a say.

You can see from NFC’s Facebook pictures of a dilapidated
stadium taken yesterday (see below and https://www.facebook.com/pgnewburyfcfundraiser/photos/)
that the stand demolition has begun by removing the 400 seats and that the
ground has been left open for access because either:

1) WBC has given permission and granted access to HTFC’s
associates to demolish WBC’s stand.

2) WBC has not granted permission or provided access. If so,
there appears to be evidence of vandalism and acts of criminal destruction
which you should report to the police.

Please can you reply to the above by no later than Monday
5th November and confirm which of the two events has taken place? 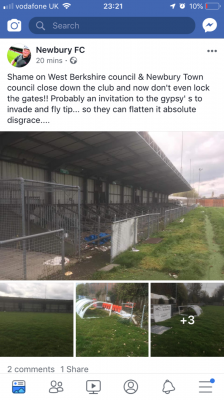